Strains: Is a Bud by Any Other Name Really Just as Sweet?

Strains: Is a Bud by Any Other Name Really Just as Sweet?

As the sheer number of cannabis growers have outpaced the dispensaries in which their products are sold, the temptation to create marketable strains only leads to more confusion for expected and unexpected medical results. Researchers are finding themselves at odds with the consumer base when analytical research simply does not back up anecdotal testimony when describing something as simple as a “strain.” Forget the exotic names that make a cannabis product more marketable. I am talking about something as simple as Sativa, Indica, and Hybrid.

Ask any OG consumer and they will tell you with the distinction of a wine taster, the finer differences in form, taste, and results from Sativa, Indica, and Hybrid. Unfortunately, studies by the School of Biological Sciences, University of Northern Colorado, Greeley, Co, USA have some remarkable statistics to dispute our typical strain classifications. The open access study is called Genetic tools weed out misconceptions of strain reliability in Cannabis sativa: implications for a budding industry, published June7, 2019 by Anna L. Schwabe and Mitchel E Mc Laughlin.

The study involved obtaining popular strains from legal dispensaries in multiple states and locations. Part of the research was to see how similar the genotype (i.e., Sour Diesel/Sativa, Purple Kush/Indica Blue Dream/Hybrid) of the same strains compared with each other as well as verifying if the genetic variants align with the current widespread definitions of Sativa, Indica, and Hybrid. The results may or may not shock you. Not only did the genotypes fail to align with the same name and different locations. Purple Kush purchased in one location had little to no identification markers to Purple Kush in another location. In addition, there was a consistent failure to obtain a baseline to define any strain as Indica, Sativa, or Hybrid.

The implications may be a simple shell game for the recreational user but the stakes my be significantly higher for patients who are attempting to follow some kind of guideline for therapeutic purposes. Anyone can argue that there needs to be more research but even the most cursory request for data will show a plethora of studies that say the same thing. “In neutral genetic markers, there is no consistent genetic differentiation between the widely held perceptions of Sativa and Indica Cannabis types. Moreover, the genetic analysis does not support the reported proportions of Sativa and Indica within each strain, which is expected given the lack of genetic distinction between Sativa and Indica (A.L. Schwabe 2019).

Playing the blame game has never helped a cause but I do believe there are several rational explanations as to why there are so many discrepancies within the strains themselves. These inconsistencies can arise at multiple points throughout the process from seed to sale. They range from mislabeling, misplacement, misidentification, relabeling, and down right creating a “new name” for marketing purposes. Some names are so close that even misspelling could play a role. As to the cannabis lore that insists on labeling Sativa and Indica, one of two things are possible. Either the public is correct and some day science will “catch up” or science may help specialize the production of cannabis with an emphasis on compounds as targeted remedies and we archive the terms of Sativa, Indica, and Hybrid.

Terpene: Terpineol
10 percent off all glass for the month of July, in store only 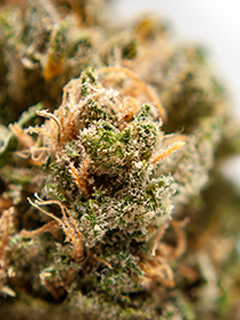